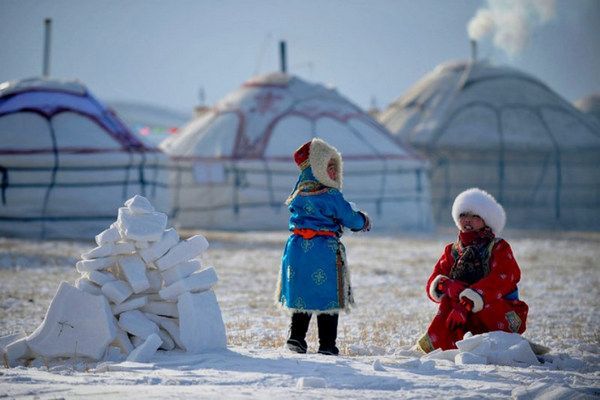 The bear is dancing on the meter-thick frozen ice. A superlative ice festival in the north of Mongolia, not only in terms of temperatures. The ice festival of the nomads at Lake Khovguul. High in the north of Mongolia, people meet every year at the hardest winter time in March and celebrate the ice festival at Lake Khovsguul. The festival celebrates the fact that the hardest season is over and that soon the spring migration of the animals will begin. The festival takes place on the mighty ice of the frozen lake. Nomads who otherwise live very scattered in the vast solitude take the arduous and sometimes long journey from all parts of the country to participate in this unique festival. We have the opportunity to participate in this festival and can witness the colorful hustle and bustle on the ice. For two days we are guests of the reindeer herders and shamans at the Khovsguul lake. In the evening we experience the warm folklore of the people around the campfire on the ice. During the day we are in the middle of the competitions. Horse racing, wrestling, skating, are just some of the sports. The "arm wrestling" on the ice floe, is especially popular with the nomadic

Combine the Ice Festival at Lake Khovsguul and the "1,000 Camle Festival" in the Gobi to a 14 day event with the nomads of Mongolia in the north and in the south at a special price

Description
Itinerary
Map
Termine 2022 /23
Prices
Print version
Book a trip
Description
Normally they lead a lonely life in the grasslands and forests around Mongolia’s largest lake. The temperatures are friendly – 45 ° C more than well below freezing. The water is hewn out of the lake in blocks. One sledge load is enough for four days. The next settlement is a good three riding days away. The days are short, the nights all the colder.
Only once in this harsh winter season, at the end of February, life changes for a short time in this region. Then the ice festival is celebrated. Not only the nomads from the wider area come to the southern shore of the lake, but also relatives from the distant capital make the strenuous journey to this unique festival.
The settlement, where they meet, counts just one ten wooden huts, most participants are more than 12 hours on the road to participate in the “winter games” of the nomads. The most important event is, of course, the horse race. For this race, the horses get extra “spikes” under their hooves, otherwise they wouldn’t get ten meters on the glassy ice. Not so with sumo wrestling, which looks very funny when the mighty sumo wrestlers have to compete without “spikes”. The same picture offers itself to the viewer with the traditional tug of war, where the teams come equal row by row on the ice into slipping.
Shamans, who still have a firm place in the faith of the people in this region, draw their spiritual circles and dances around the competitors. Faith is an important component and also replaces with pleasure once a good training. Of course, the audience also appears in colorful costumes. Red, green and especially the sky-blue cloths of the nomads offer an interesting contrast to the glistening white of the snow and ice covered mountains around the lake.
It quickly gets dark in the evening. Then it is the time of the big campfire. The ice sculptures created by the nomadic families during the day are illuminated by the glow of the fire. Now is the time to warm the body from the inside as well, not only with warm food.
The Ice Festival is held every year at the beginning of March. The festival is reached by plane from the capital, then by four-wheel drive vehicle through the snow-covered landscape and finally several kilometers across the frozen Lake Khovsguul until the small settlement is built. Overnight is spent in cozy wooden huts, or in the amazingly chubby warm yurts. For the journey to the “warmly cold ice festival” one should take already one week with arrival and departure time.
Itinerary
Map
Termine 2022 /23
Prices
Print version 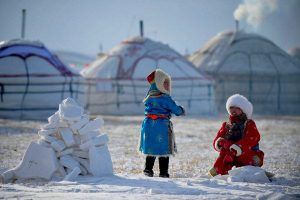 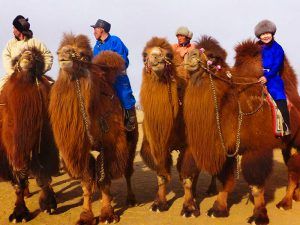 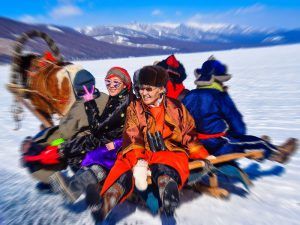